FACT: On average, a victim of abuse will return to her batterer seven to nine times before permanently terminating the relationship.

For those oppressed in domestic violence,

leaving is a process not an event.

When a victim breaks it off with her batterer, she may be trying to decipher if she really can live without him and thrive on her own or not. As mentioned in Myth#7, leaving is an incredibly dangerous time for a victim. It may be in fact safer for her to return to her batterer. The old adage “Keep your friends close and enemies even closer” may prove true for some domestic violence victims.

Remember, domestic violence is patterns of behavior designed to exert and maintain power and control. A huge factor as to why victims return to their batterers is due to what’s commonly known amongst advocates as “the honeymoon phase” in the deceptive cycle of domestic violence. After the explosion or abusive incident occurs, the couple enters “the honeymoon phase”, where the batterer apologizes, promises change, possibly gets help, etc. A batterer may claim he is a changed man or promise to change, promise to go to counseling, and it will never happen again. Meanwhile, the victim forgives and feels hopeful of change. Life is seemingly good again.

You need to understand batterers are not always monsters, which makes it so confusing for the victim. Rather, they may be good providers, hard workers, and most definitely fantastic manipulators. They may even be sincere in their promises of change after the explosion. But more often than not, their promises for change, if it ever was sincere, wears off and the couple enters what’s known as “the tension building phase“. Over a period of time, the victim will eventually notice distinct patterns in their relationship that will signal an explosive moment is in the works. We call this “the tension building phase“. Sometime thereafter, another explosion occurs. The victim may once again attempt to terminate the relationship only to be lured back in with grandiose promises of change and vain hope. Cycles of abuse can take place over years, months, weeks, days, or even hours. Couples will often progress through the cycle faster and faster with each episode.

Emotional and verbal abuse are common precursors to physical abuse.

Furthermore, with each cycle, the abuse often worsens and is possibly enhanced with more impacting life events, such as pregnancy or birth of their child. Women who are married to their batterer, have children with him, are pregnant, or have other substantial ties to their batterer have an especially difficult time breaking free from the cyclic patterns of domestic violence. Furthermore, women of faith wrestle with complicated emotions of guilt and shame as more often than not congregants fail to support her and her children’s overall well-being. Rather, some may encourage her to demonstrate grace to her abusive husband while minimizing and enabling the sin of abuse. To further complicate matters for some women of faith, their husbands are not only batterers but even clergy! The same could be said for women married to law enforcement, attorneys, judges, etc. It is less likely a victim will be believed and get assistance from others if the batterer holds an authoritative title. Subsequently, the cycle continues. 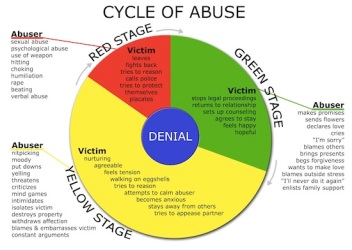 Additionally, you will see in the diagram pictured above, that denial propels the cycle. Sadly, there is little to nothing loved ones can do to help victims escape the toxic relationship if she continues to live in denial. The best thing loved ones can do is to educate themselves on domestic violence so that they will be able to assist when she is finally ready to acknowledge the truth of the relationship. One tool that a victim could use to help her identify these patterns in her relationship is to document behavior (i.e. fights, promises of change, good times, etc.) on a private calendar such as on her phone or in a journal.  With such creative and secretive tools, the victim may finally begin to discern and accept the reality of the relationship and seek help. In some ways though, the cycle of abuse becomes like an addiction. A difficult cyclic addition to break; subsequently, it is not uncommon for the victim to experience seven to nine relapses, if you will, before finally moving on to give herself a life free from abuse. It is often easier to embrace a lie than to surrender to the truth.

How Can We Help? Check It Out!